Limmu is one of the woredas in the Oromia Region  of Ethiopia with Gelila as the administrative center of the woreda. It is a part of the Misraq ( East) Welega Zone bordering the exclave of Benishangul Gumuz Region in the south, Sasiga on the southwest, by Benishangul-Gumuz Region on the west, by Ibantu on the north and on the east by Gida Kiremu.

Limmu is one of the zones in the Oromiya coffee growing regions of southwest Ethiopia. Limmu coffee grows at an elevation of 1500-1900 MSL
producing medium-sized beans with a characteristic round shape and a greenish colour. It is generally washed and it has a similar cupping
profile to Sidama and Yirgacheffe coffee having a citric acidity, with soft berry undertones and chocolate-floral notes. The flavour is generally characterized by a balanced and clean cup 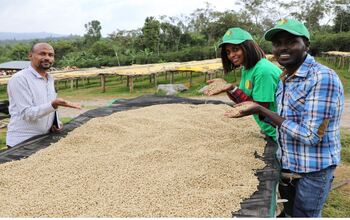 The coffee brew has a well-balanced mouth feel and vibrant floral overtones.It is balanced, sweet, slightly spices with pleasant wine like characteristics. Some Limmu coffee also have floral and stone fruit notes. Limmu is noted for washed and dry processed coffee of higher grades. It also carries a reputation for producing better coffee probably because of better agronomic standards and good processing, well established farms and good number of washing stations.